My Life in Art, Sometimes

I’ve made art all my life, but often in stolen moments when I was busy elsewhere. I often considered myself a scholar, an academic, an arts writer, a blogger, or a digital communications professional, but I never really defined myself as an artist. Not professionally, at any rate. Yet now, as I devote more days to drawing and journaling, I am inclined to bring the word “artist” out of the shadows and into a bolder place on the resume.

Many late-blooming artists know this story, particularly women who set aside artwork for a couple of decades for the work of marriage and child rearing. Many men know this story, too, trading in artistic aspirations for professions deemed socially more practical. I’ve seen these late bloomers wandering the aisles of art and craft stores, looking for companionate shoppers to tell their story of long-buried aspirations coming to life again.

In my work advising artists on their professional careers, I’ve noticed that artists often rely on their resumes, or the curriculum vitae to be precise, to tell the story. These complied documents most often just provide a list, arranged by year, of their participation in groups shows, or if fortunate, showcased in solo exhibitions. Yet, the resume doesn’t tell the story of the work - obsessions, interests, preoccupations. So many questions remain between the bullet points. When did you fall in the love with the Ashcan School? Why do you love the color blue? Who encouraged you to draw this way? Were you always a whimsical person who loved Marc Chagall, postwar French illustration, Venetian alleyways, and cats?

If I told my story in art, I would say something like the following.

I grew up in Dallas, Texas, which was not a bad place at all for the arts. I don’t remember much of kindergarten except for the pleasures of dipping my fingers and brushes into jars of brightly colored paint. In grade school, I loved art class best, crafting angels out of paper-maché, building log cabins for pilgrims from corrugated paper, and gathering fall leaves to iron between pieces of wax paper. Often, early childhood art survives, because the parents cherish them so.

In high school, when I grew aware and self-conscious, I fell in love with art history. As a byproduct, I spent more time in the school’s art studio obsessing over various paintings. I remember painting a series of large square abstract canvases showing variations of some sort of machine part. Going in an opposite direction, I painted a woman dancer on a circular canvas, playing on Leonardo’s Vitruvian Man. A fellow student asked to buy it, and I sold it to her.

When I wasn’t in the studio, I started hanging out in museums, a most worthy way to spend the time that I continue to this day. I spent hours at the Dallas Museum of Art, then located on the grounds of the State Fair. The museum prided itself on its contemporary collections, with exciting works by Robert Motherwell, Jasper Johns, Robert Rauschenberg, and Andy Warhol. I loved all these daring works. During the political upheavals of 1968, I spent the summer taking a watercolor class at the museum, often sitting outside by the lake and painting trees and water.

At home, I turned on the TV and watched the uprisings at the Democratic Convention in Chicago. When I watched the beatings of the antiwar and civil right activists, I grew more and more interested in politics and literature. When I entered college, I began as an art history major but switched to political science. All things political, especially theory, continued through grad school and my early teaching career, but I shifted to American Studies so I could incorporate more art and literature into my studies.

Yet, art was always there. I drew and painted occasionally, especially during professional or personal transitions. In the early 1980s, I painted a portrait of T.S. Eliot that sat on the mantle of my grad school home. A housemate kept it for decades and recently brought it home to me in New York City.

A marriage and a couple of moves across country confounded any direction for my professional life, but I spent many hours acting out my creative impulses, mostly of the domestic variety such as interior design and cooking. For a few years in South Carolina, I set up a makeshift studio in the garage and fooled around with oil pastels. I painted nutty still lifes and portraits of my pets. My most sustained work involved a series of portraits of my fox terrier lying on a floral burgundy carpet. Friends enjoyed these, and one won a prize at the state fair.

While preparing a move to New York in 1996, I made a large oil pastel of my dog Bear. A bit obsessive in its execution, the work is inspired by Venetian mosaics and the lion of St. Mark. Bear was a great dog, a veritable saint. In another nod to Venice, I created a series of papier-mâché masks of my two dogs and cat. I sold a few of these through the gallery where I worked as a part-time director.

Upon moving to New York, I had a vague idea to work in a gallery and write about art. I spent a few unhappy months as a gallery manager. In one of those times of transition, the most creative and fertile time for me, I spent several summer days in 2007 helping a well-known established artist clean and renovate his studio in the East Village. He gave me lots of career advice, mainly to not let anyone have power over me. At the time, I wandered all over the city, making sketches and exploring new places. The artist suggested I put these rambles on the Internet. I followed his advice. Because I was also walking to lose weight, I decided to call my blog Walking Off the Big Apple.

Walking Off the Big Apple enjoyed a successful run, especially in its early years, and I still update the site. I found that taking pictures was much faster than sketching and drawing, so I ended up taking thousands of pictures of the city over ten years. Photography wasn’t new for me, as I always enjoyed taking photos of friends and places. For a few years, I took drawing classes at Cooper Union and participated in life drawing sessions at Spring Street Studio and elsewhere.

In 2013, my life situation changed, and I moved to Northern Manhattan to start an independent life. For a couple of years, the art and the website took a back seat to full-time work as a digital communications strategist. I became more fluent in digital marketing and social media. Now I work as a consultant, specializing in nonprofit organizations.

In 2014, after my brother in Colorado passed away, I went to the animal shelter and brought home a young black cat to live with me. He’s excellent company and serves as a model for many of my drawing practices, especially during bouts of cold weather.

Since 2018, I’ve been increasingly drawn to illustrations of one sort or the other, cartoon-like cat people, and landscapes. I still take a ton of photographs, especially in nature settings. With the arrival of the pandemic in 2020, I found I could still make short trips to the countryside, especially during the summer. During the colder months, I often turn back to interior subjects, like houseplants and my cat.

Writing and drawing in sketchbooks and journals remains a daily practice, not just to keep up with my art but to also stay in touch with my interior life. Keeping a journal of observations is like making a field guide, directed both outward and inward. Several years ago, I realized that my two greatest passions were art and nature. 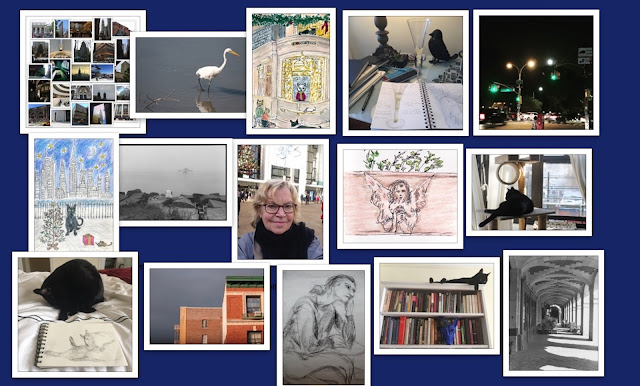 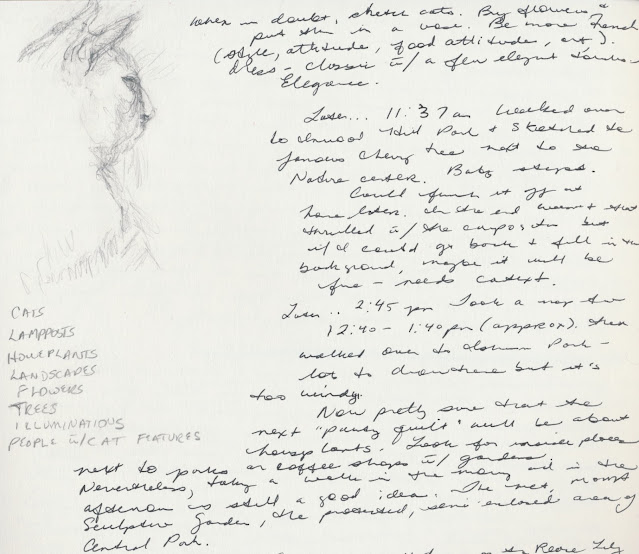 When in Doubt, Draw a Cat 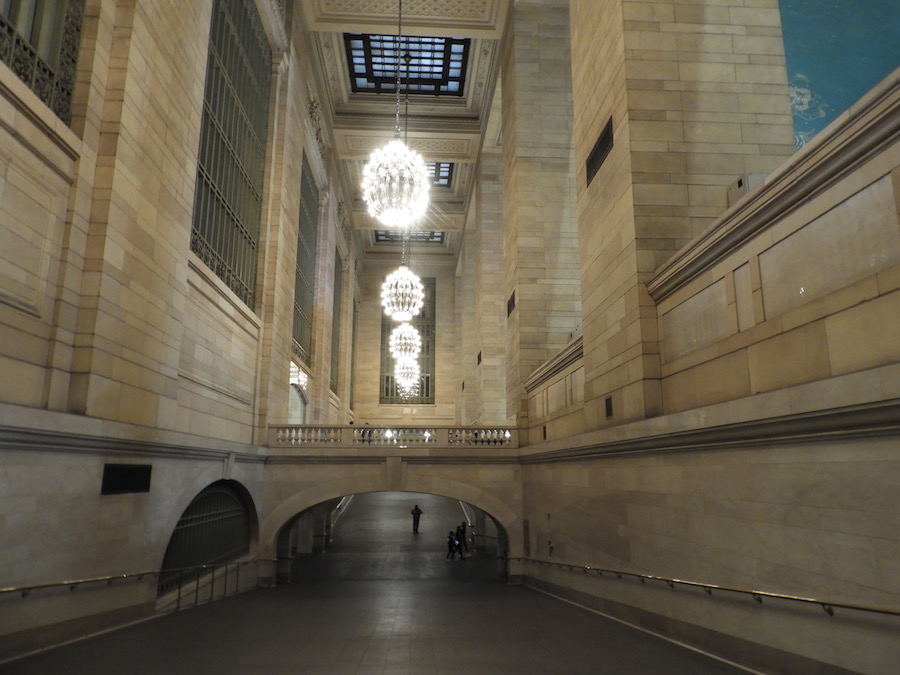 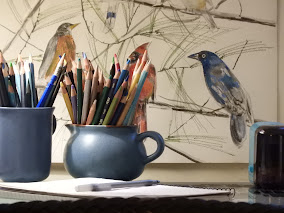 On Walking Off the Big Apple